Madina Masjid was established in Windsor , Connecticut in 1993. Since its inception, we have been diligent in adhering to the correct understanding of Islam according to the Book of Allah, the Qur’aan, and the authentic teachings of the Prophet Muhammad (sallaa Allahu ‘alayhi wa sallam).

Presently located at 140 White Rock Dr. Windsor Connecticut 06095, Madina Masjid is a growing community with a wide variety of ethnicities and cultures. Masjid is open 24/7 to serve the needs of the Muslims. In addition, we offer Quran Class and weekly classes open to the general public on a number of Islamic topics, as well as host special events with resident and guest speakers.

Madina Masjid’s goal is to increase awareness of the essence and beauty of Islam upon its correct principles to cultivate and educate ourselves, as well as the community in general.

About the Director of Religious Affairs 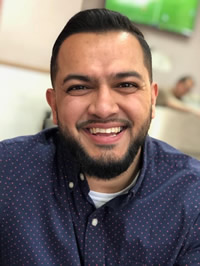 Nihal Khan is the Director of Religious Affairs at the Islamic Center of Connecticut.

Born and raised New Jersey, Nihal completed a Bachelor of Arts in Psychology with a minor in Business from Montclair State University, wherein he also served on the board of the Muslim Students Association between 2013-2014.

More recently, Nihal received an ‘alimiyyah degree in the traditional Islamic sciences from Dār al-’Ulūm Nadwat al-‘Ulamā in Lucknow, India. He also holds a Master of Arts in Religious Studies from the Hartford Seminary, wherein his research focused on mental health in Islam. During this time, Nihal also completed coursework and research at Harvard Divinity School through the Boston Theological Institute.

Previously, Nihal has served the Center for Muslim Life at Yale University as a guest instructor, the West Cobb Islamic Center in Marietta, Georgia, and Darul Islah in Teaneck, New Jersey.